Caper
Please stop making faces!
Beautiful hair, shiny, long, short, doesn’t matter–I mean the kind of hair that girls envy and say so out loud, right to his face.
But, I’ll be damned if he gives me one good smile for a picture. There’s always a face, a different one for each shot. The creepy guy face. The cool guy face. The demon face. The goofball face. The sad face. The smiling but really crossing my eyes face. Or, just smiling with crazy eyes.
He’s been like this since he pulled the Houdini act of climbing right out of his crib before he could walk.

When we go out, I need a few cups of coffee to keep me alert. There are days when I wish the coffee was something else, that’s how fast I need to be. I’m ready to jump, spin, grab, block, catch, you name it.
Somewhere inside every maniacal act of bouncing to his own beat, I laugh amidst the frustration of taking one good picture.
When we visited San Francisco, there were so many moments when the pictures were more than perfect, especially if he didn’t know I was taking them. Often, the theatrics made the pictures so much better, the exaggerated extension of his legs when climbing the uphill battle of getting back to the hotel made it oh so much more than just a good picture.
Walking through Chinatown and finding a brilliantly colorful dragon drawn on the side of a building, we stopped for a picture.
But, ten shots later, my perfect picture almost didn’t happen. 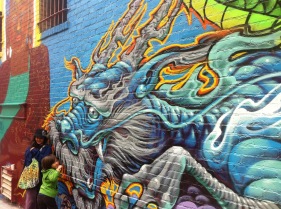 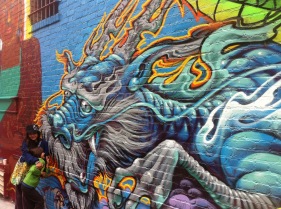 He insisted not only on theatrics but also on making sure he picked the dragon’s nose by sticking his hand in its giant nostril. With a smirk and a flick of the eyes, his sister pulled his hand down and we got something.
The dragon seemed fine with it.
In hindsight, I think the dragon was in on the whole joke.
Ironically, he hardly ever says I’m just joking.
He used to pontificate about pranks, which happen to be one of his favorite YouTube pastimes. Recently, it’s just weird drawings on the teacher’s whiteboards. Thank God they also have a sense of humor.
I could regress to his obsession with moles that appeared everywhere, so much so that I had to threaten that the moles had better not appear on photographs or human skin without permission.
However, I think you get the idea.
It seems that to him life is just way too serious.
And, if I weren’t such an adult, I’d be picking that dragon’s nose with him.

I'm a writer, digital storyteller, award-winning educator, and advertising and marketing professional who hopes to rally everyone around one single mantra: Be brave, smart, and bold. As an educator, I love to remind students to dream in the midst of politics gone mad! Thus, I am also a dreamer. View more posts

I am more than breath & bones.

A Glass Half Full

travel and life with lee mylne

This is where I come to life

No one is an *aspiring* author. If you write, you're an author. Just an author.

life with little and lula

Words from the River

On writing, writers, and the world of words

How to Make School Better

Change one thing at a time

Throwing my soul into the cosmos.

Scraps and Scribblings from Amanda Hoving

Writer of Sci-Fi, Fantasy, and Everything In-Between

My business is generally pleasurable.

Echoes of Life, Love and Laughter

A Wife, My Verse, and Every Little Thing