Watching students test has become an obsession for me, as a teacher and as a mom. I first began studying The Test about 10 years ago.

I had always held a deep disdain for even the mention of the word “test” while plowing through my school years. I hated tests because I’d shut down and perform poorly on tests. This happened after an encounter with a terrible test at a young age. So, I began to loathe testing. 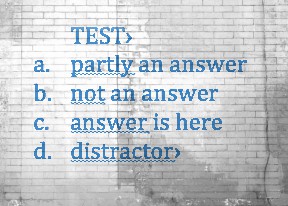 It wasn’t until I became a teacher that I felt compelled to study and ultimately understand the process of taking a test. After all, teachers have to create tests so I needed to know exactly how I should start, so I searched different websites dedicated to teaching educators how to create tests.

I began with multiple choice questions and answers because those were the kinds of test items that made no sense to me. I rarely understood why my answer was wrong when teachers reviewed answers with my classes.

The reviews usually consisted of teachers ticking off the right answers and only explaining one or two in a very matter of fact way, as if to say, “Don’t you dare question the logic of the test.”

So, I never did. I only questioned my intelligence, which meant I thought I was an idiot. Until now.

The first question I had

was why in the hell am I creating a multiple choice test anyway? Where did the damn thing come from?

The Washington Post has a great article about the origins of the multiple choice test. The writer also adds some background information about how educators assess students and questions the validity of the act of testing at all. It’s definitely worth the read. http://www.washingtonpost.com/wp-dyn/content/article/2006/11/13/AR2006111301007.html

According to The Washington Post, an educator named Frederick J. Kelly, the Dean of Education at the University of Kansas, created the first multiple-choice test in 1914. From that point on, that style of testing mushroomed into what we find students struggling over throughout their educational life.

So when I sat down to research the very idea of creating the multiple choice tests, I found a mountain of information on the subject. So much information, that I really had to sift through it quickly or I could’ve been reading for months nonstop.

The most surprising and most valuable information was the method of using a distractor in the multiple-choice answers.

Ironically enough, the word “distraction” has become the 21st century go-to word to describe everything associated with everything electronic and has young students drowning in schools.

If you’ve ever had the pleasure of watching a student test nowadays, you’d see very quickly how and why students often struggle with standardized tests. First, they see a paper with words on it and cringe. If it’s on the computer, they won’t cringe but that doesn’t mean they’ll concentrate on the material being presented to them, especially if it requires reading.

Most unsuccessful students seem to skim or scan whatever they’re reading and answer the questions by returning to the text to search for answers, which means that they’ve most likely missed the main point of the passage, which then throws off their answers to just about everything.

They end up with low scores and are left feeling stupid, anxious, and defeated.

They go home and become more addicted to the distractions that help them to feel confident, happy, and friendly—gaming and social media.

These are the distractions that reward them. The test drains them. And, we, parents and teachers, feel twice as frustrated and confused.

However, by observing this, every year I don’t begin my multiple choice creations with distractors. I begin my journey with my own brand of distractions.

This post and others to follow will focus on teaching and helping children succeed in school. I’m working on a book that will have more details on sifting through the minds of children in order to help them find success in a system that often destroys their ability to succeed.

2 thoughts on “Distracted by Distractions”